Thank you for your question!
We will respond in less than 48h.
UX

UX-DEV marriage of convenience? Not anymore! Here’s our why User Experience (UX) design is still a young and prospering profession  which is getting now more and more attention in IT. It’s really good to have at least one UX designer if you’re building a forward-thinking and versatile IT team. There’s just one but – as far as I’m concerned, not all developers are still used to working with them.

For developers who have been designers of their own code until recently, presence of a non-technical person in their team may still sound uncomfortable. Let’s be honest – designers and developers usually tend to fight on daily basis.

The reason for this combat originates from the differences of understanding the creation of project – developers have a deep understanding of code and how everything should work from the inside of an app, but designers are kind of visionary. They know exactly how they want their app to look. More importantly, they have sense and set of skills to anticipate how the user swiftly moves from page to page, gaining all the profits from well built design and concept basing on users’ behavior, and wait for it… their user experience. But still don’t know anything about the „guts” of whole machine they’re working on.

Backend vs Frontend – the eternal struggle

Generally, if we speak about the design, visual concept is kind of easier to accomplish on the frontend side of developing. Everything gets complicated on the backend. Actually, if a UX designer lacks experience and know-how, s/he might make a mess on either side, front- and backend. Especially, when s/he just listens to customers demands and can’t offer reasonable solutions. And where is the whole magic born? Exactly halfway! Designer finds half-measures and to all parties’ satisfaction, which includes developers team, clients and UX designer own visualizations. That’s what we call a good UX designer. The question is: how to make it work?

Lesson no. 1 – share your secret wisdom with UX designers!

First major rule – try taking care of letting them know the actual technologies. Without this, how could they even think of creating a solution to a problem, and at the same time, an app that would be easy to develop? UX designer should definitely be able to make devs work faster and more efficient, never more complicated. Everything has its limits – this does not however refer to the designer’s imagination. That’s why you need to keep in mind some of the limitations, about which you have to educate UX. These include platform/tool limitations or language which developers use. It’s always a good idea to let the UX designer join the meeting of devs team and keep close to the code-related-talking stuff. At first it may sound like a total waste of time, but the more UX designers hear, the more understanding they have for the need of future projects. Let them hear, and at the same time, be listened to.

We often hear about fights between devs and UX designers. Well, imagine having a newborn baby, and then someone steps in, takes over, and brings it up from the scratch, reforms it, and gives it other name. Wouldn’t you get furious or at least mildly mad at those evil people? Of course… Now you know the feeling of UX designer. That’s the moment until reaching the coding point. They bring clients’ wildest dreams and fantasies to the maps, docs and even clickable prototype, test all their work on the users, fight to death for every button which makes the whole project even more successful, visible and usable. Then comes the coding reality which crashes their project. If project is created without understanding how technologies work, then milions of problems in the team arise. Designers fight for every single piece of their concept, which is completely understandable, even if they might be wrong from the technical point of view.

As far as I’m concerned, basing on my experience, first thing to do is not to take any project too personally. Second of all – consider creating open space for dialogue and mutual understanding. This what definitely is going to make a difference, especially in terms of the expected outcome of the whole project – the design. Take care of space for open dialogue and you will definitely see a significant shift in the team’s work.

Quite a drama, isn’t it? In this whole drama you can’t forget about the developers point of view and their role. Care to confirm the app designer stereotype? Stubborn, picky and pixel-perfect persona. Whereas the developer is soft, easy to hurt but still bolshie. If devs are open for talking, they may be able to appreciate the importance of designer in their work. As they say:  „Good UX will make your life and code easier!” Never underestimate the role of a good UX designer! Once they create working-process-related bond, they’ll make best apps this world can see.

Call it a day? Never!

Last, but not least. If we’re still in the UX-work topic, when the work really ends? We already know, the project is born with the designer, but sometimes the designer comes in the middle, even way before the term UX had been even coined. Well, it doesn’t matter when the whole design work starts, but it also seems like it never ends and it surely shouldn’t! As apps by the time develop, new features are constantly being added, bugs fixed… technology changes as well, so it’s an open, on-going process. The UX designer’s support is important to expand whole project professionally, without too many failures and, more importantly, from the business point of view and, of course, to lower the cost of developing. Remember – the UX should make whole work easier and better. What’s more usable, useful and visible. That’s why caring for the understanding in dev-ux team should always be a golden rule.

Collaboration between UX and DEV teams is crucial for creating a seamless and effective user experience. Little communication will only lead to disconnects between design and functionality. These teams, should work closely together throughout the entire product development process. Companies can ensure only then that the design and functionality are aligned, resulting in a better overall user experience.

Check out other articles on UX and UI

Get better understanding of product design 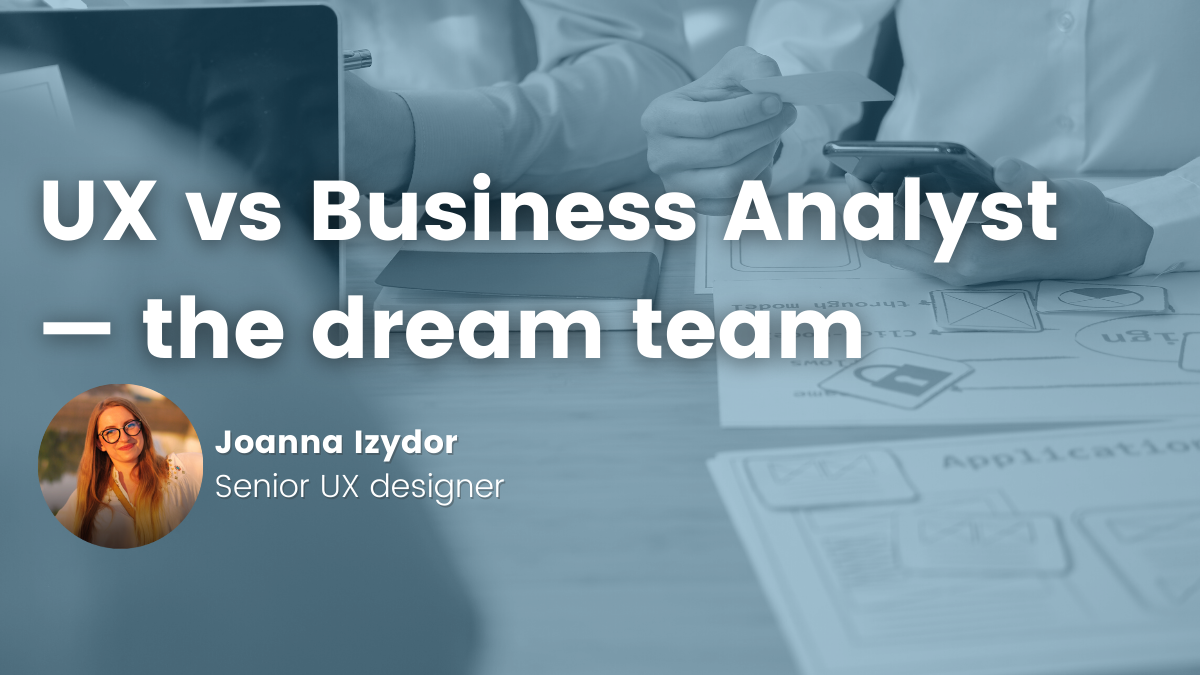 UX
Why should you invest in UX design service?
Sebastian Guzina
Read in 4 min.
Do you have any questions?
Let's talk!